Phew what a hectic time I’ve been having! I managed to hurt my Achilles’ tendon which resulted in me having a few days off work, and what should you do if off work for a few days? Weeeeeelllll comic creating of course! So as I was laid up I put in hours and hours on my new book and managed to get it finished! I tried to do something different with this one and with it being a sequel to Anxiety Me! I wanted it to stand out in its own right, so I decided on doing it in a negative style so white on black and blue paper, it was a new challenge but I throughly enjoyed the process, though I did manage to go through a lot of white paint!

The end product is here and much longer than Anxiety Me! I’ve called it Moon, in fact I dreamt part of this story and had to get it down on paper, why I’ve called it moon will become apparent as you go through the story.....honest!! 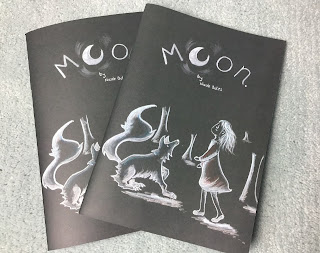 This book is taking on the idea that worry is good for you, it is a survival technique but over worry is very destructive and engulfing, I tried to get this across with Yu (yup I have eventually named her) and her relationship with worry. Hopefully this one won’t make people cry, there’s also a few more words in it, but on the whole I’m trying to keep with the idea of the pictures telling the story.
I hope you enjoy it as much as I did creating it. 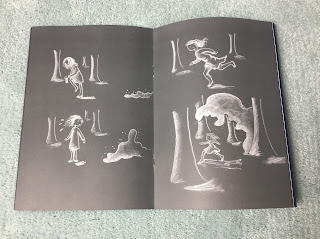