So yesterday, as I write this post, I visited the lovely town of Macclesfield to have a go at selling my comic at Macc Pow. I was exceptionally nervous but had been pushed into it out of love to give it a go. The event was setup in the town hall and as I arrived most of the venders had already setup. I had a small half table and was seated next to a doctor called Sarah who was giving away comics all about how foreign women have struggled moving here to the UK and a lovely guy called James Chapman who can tell you all about how a dog sounds in Japan! They were both lovely and helped me settle into the con.
It started very quietly and I know this was normal however it doesn't help build your confidence as the odd person walks past your table with just a glance. People weren't buying... was I doing something wrong? Was my comic rubbish? Then I looked around and no one was selling stuff expect the odd person. I was worrying when I needn't be but that never helps when your selling your heart and soul in a comic. 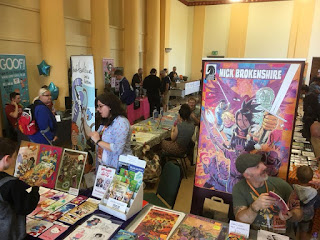 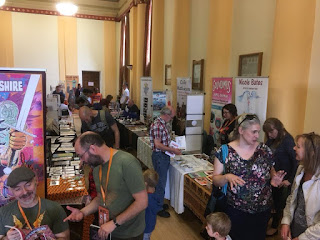 Slowly however the hall started to fill up and sales began to happen. I found taking to people and telling them about the book helped a lot with sales. I smiled and said hello to everyone. Ian even managed to sell some as well. I had a lot of people who were not comic readers say how nice the art looked and that they were pulled in by my banner. They were never going to buy a thing but it was nice to hear.
An amazing artist named Nick Brokenshire was sat opposite me. He's such a lovely guy and has created some brilliant comics. I cheekily ask him for a Ghibli inspired picture which he kindly drew. This is going up on my wall!
Overall it was a tiring but fun day. I got over my nerves and learnt how to sell comics. I may not of sold as many as I'd like but I covered my costs and I made a lot of new friends and hope to see them again in the future. Everyone was so nice and friendly which made the day as good as it was. Roll on the Lakes International Comic Art Festival where I will be selling for half a day.
- June 24, 2018